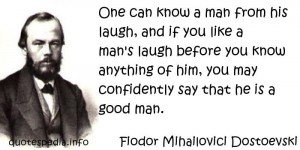 Laugh ’til it hurts (because that’s when it really feels good)!

Laughter is the best medicine. We instinctively know when something rings with Truth, and that old cliché certainly rings true.  I guess the whole reason it’s a cliché in the first place is because clichés are the redundancy of truth.

We know that it feels good to enjoy the happiness of laughter versus the sadness of crying.  The feelings associated with the physical manifestations of emotional energy couldn’t be more opposite.  One feels bad.  One feels really good (I hope everybody agrees that it’s the laughter that feels good).

Because I love to feel good I find my closest, and by far best, relationships are filled with a lot of laughter.  I choose my friends for their wit and ability to laugh (at themselves and the world around them).

Laughter is not at all a bad beginning for a friendship, and it is far the best ending for one. – Oscar Wilde

Cliché or not, the facts are in on laughter.  Many researchers believe that lowered serotonin levels lead to depression.  Being the biochemical masterpieces that our bodies have evolved (and continue to evolve) to, we can combat depression (and even lack of bowel movements?) with humor.  Laughter naturally releases the “happy neurotransmitter” into our bodies – it basically transmits impulses in the space between nerve cells.  With 80% of serotonin found in the gut (for the regulation of the intestinal tract), you can see how one might believe that laughter can really help loosen you up in more ways than one.

Serotonin is also the precurser to melatonin which helps regulate our sleep patterns.  Again, good serotonin levels can help us sleep better. Melatonin is secreted from the beautiful cone-shaped pineal gland in the middle of our brain.  This gland (without a right or a left side, but dead center) is known to secrete many substances that have given it the nickname “Spirit Gland”. In that vein, laughter brings you closer to your spiritual Self.

When you’re feeling down, if you can find just the right humor, you can laugh yourself silly (and chase those blues away).  A few months ago, one of my friends lost her beloved dog. Her best friend and roommate helped her through the grief by purchasing the first 2 seasons of “Workaholics”.  Now it’s not a show that everybody will “get”, but it’s full of the perfect “inappropriate humor” that my friends and I love (along with the likes of “It’s Always Sunny in Philadelphia”, “The Office”, etc).

Since our body responds to our thoughts, laughter can also eradicate illness.  On the benefits of laughter:

Against the assault of laughter nothing can stand. – Mark Twain

Why do we laugh?

Babies average hundreds of laughs per day. Laughter is the audible and physical expression of a joyful emotional state.  To learn A LOT MORE about the subject, just visit the Wikipedia page on laughter.

While I’m sure I didn’t understand irony and satire as a days-old baby, it has certainly been my favorite form of humor (and thus laughter) since I could understand a sarcastic remark when I heard it.

Satire is as old as, well, Ancient Greece. Satire is a form of comedy. Of course, one didn’t often guffaw during a satirist’s iteration of post-tragic irony. It was much more socially acceptable to fervently chuckle.  It should also be noted here that  history always repeats itself.  Thousands of years beyond Euripides, Saturday Night Live’s own Jim Breuer did a satire on a Satyr with his popular Goat Boy character.

My personal comedic preferences lean toward modern day social-satire more than other forms of humor; though a well-timed prat fall or pre-pubescent poop joke will always get a chuckle because, well, I like to laugh.  (When one is born with two big dimples, it’s kind of expected.)  I think some of my love of humor also comes from my mother’s constant reading of Theodor Geisel (Dr. Seuss).  Her voice with his words are some of my oldest, and fondest, memories.  It didn’t hurt that I grew with young parents and aunts/uncles who all seemed to have inherited an acerbic wit and love of sarcasm.

While one might think Dante Alighieri’s Divine Comedy is in fact a knee-slapper, one pass through the “Inferno” and you realize the title is simply a play on words.  God must be funny because look at what has been created.

But paradise is indeed filled with enjoyment.  Just look at the teachings from the past.  When speaking of Eden, so many writers allude to dancing and glee, and there are many spiritual and religious texts that refer to joy and laughter as being in a state of grace.

On the other hand, there are particular religious beliefs that refer to too much laughter as “deadening the heart”.  Based on biological insight, that couldn’t be further from the truth. As we now know, laughter makes the heart healthier!

Humor and laughter is intelligent and creative

According to modern research, having a sense of a humor can be a sign of intelligence or psychological balance.  These are indicators for mating selection in humans.  Ever hear a woman say, “I like him because he’s funny”?  Laughter is not only joy, but it means you “got the joke”, and when you get it, you’re thought to be smarter.  If you MAKE the joke, you’re not only smart but creative as well.

By the way, if you’re really smart, and you’re interested in humor, check out this cool discussion on humor and intelligence.

Our creator must have a sense of humor. Just look around this world we inhabit with crazy little bug-eyed creatures, big red baboon butts,insanely long giraffe necks, weird-looking fish.  We also have humans in Hollywood and government who look and/or act like that .  They are things not completely understood, but nonetheless humorous.

Believing that intelligent creativity is why I’m here, I especially like this quote.

God is a comedian, playing to an audience too afraid to laugh. -Voltaire

In no particular order, and by no means complete, the things I look to whether I’m in need of a chuckle or a belly laugh:

The next time it hurts…

I’m certain there a many schools of pysch-thought that would disapprove of this behavior, but the next time you’re hurting, find a way to laugh.  I have a history of what we can call clumsiness. I break bones, and I’m especially hard on the soft tissues in my body.  I don’t bawl my eyes from the pain of my injuries because I learned early on to laugh. Just a few years ago,  I found myself laughing as my ankle swelled to the size of a grapefruit as I sat on the sidewalk of a busy street, and I cracked jokes as the doctor pulled the 20 stitches out of it 2 months later.

I know the “accepted” response to pain is crying; however, I am of the belief that our thoughts have a direct effect of on our physical self.  We know that laughter releases ‘feel good’ chemicals, so it would only make sense to try to laugh through a painful situation.

After the initial shock of a break-up (when I cry, watch Nicholas Sparks films and don’t shower for a few weeks), I eventually pull myself out of the funk with humor (and finally a shower).

I’m sure I’m supposed to “feeeeeeeeeeeel the pain.  Endure it. Don’t run away from it.”  My laughter should never be misconstrued as an ignorance of pain.  Oh no.  The pain is there. Of that I’m certain. I simply use the power gifted  me, and everyone else, in making the choice to feel better instead.