The verb use of the word manifest means “to reveal or display; to show plainly”.  In metaphysics, manifesting is bringing thoughts and desires into existence. It’s something that everybody has the power to do, but many people have no idea how.

I have proof of two major manifestations in my life over the past month. The first was described in my piece “Love on the Doorstep” where I manifested money to cover my expenses. The second time was this past week.  I’m going into story mode, so grab a cup of coffee (or non-caffeinated beverage) and enjoy.

I have wanted to live in Hawai’i since first visiting a few years ago. It felt like home to me, and even on my first visit, people mistook me for a local. (They could obviously feel what I was feeling for that place).

Over the past couple of years, I have collected items that could help me “see the dream” of moving to Hawai’i.  I have a coconut fetish hanging above my bed, and I have small pieces of coral and seashells all over the house along with pictures, etc.  I have always had an affinity for island music, so I began to play it in the house more often.

I quit a pretty lucrative job this past summer (because material advantage isn’t all it’s cracked up to be, and I apparently felt like tempting fate in a down economy?). I wrote my book, “Personalities of the Tarot” because it had been bouncing around in my brain for a few years, and then the money ran out.  I had quite ignorantly (likely on purpose based on the fact that I’m born under the 2 of Swords) not factored in how quickly my savings would run out while covering the incredible overhead I had accumulated over the past few years (expensive rent, utilities, many dependents in my home, my desire to continue eating well, etc., etc.).

With the money gone, I had no idea how I was going to get to Hawai’i. I decided to build a “Hawaiian Manifestation” altar, and I asked my significant other to join in (the more positive energy from a common vision, the better!).

I put the altar together with things from Hawai’i including a sarong that I used as an altar cloth, various shells and coral, cards depicting my desires, tiki gods, dolphins, pictures, etc. While I was putting the altar together, I (obviously) played my favorite Hawaiian music, and I thought about nothing but seeing me there smelling the ocean air, feeling the moisture on my skin while seeing the blue of the ocean and the green of the plant life.

When it was complete, I lit a white candle and prayed. I asked that I be sent opportunities to get to Hawai’i (sooner rather than later), and I promised that I would be open to all potential outcomes and possibilities.  I prayed that when the white candle burned down, the energy would be released out into the universe. I imagined (or SAW and FELT) the energy spread out into the universe.

I created the altar on Saturday, November 26th.  On Wednesday, November 30th, things were coming to critical mass in my world. I was wondering how I would come up with rent, utilities and food money for the month of December  (though I was making it a point NOT to stress out about it). I began looking at local Craigslist ads for cheaper places to live in my area because I had to significantly downsize to cover costs.

Oh, and did I mention that I was back in a role that I told myself to never get into again?  Thankfully I knew it was a VERY temporary situation from the beginning.  I am not really stressing over it; though, to be honest, the job seriously sucks. I’m finding it harder and harder to tolerate corporate-office, call-center work. It’s a complete disservice to mankind.

I’ve tried getting a job as a landscaper because I love working with plants and being outdoors. Every single minimum-wage job required previous experience, so I was back to playing the corporate call-center game that thousands of people use for income these days.

I just want to be Hawai’i. I want to go HOME. I have been telling people for years that I will happily occupy a lean-to with no running water, and I will merrily clean toilets for food. I will live in a shack and take the most “menial” (one man’s menial is another man’s…) job if I can only watch the sun rise or set over that ocean every day.

To get out of this desert and be among living things (plants, rain, the ocean and its inhabitants, etc.), and to be around like-minded people, is all I really want in this life. I’m tired of a society telling me that, to succeed (or even just to feed my family!), I must conform to their unnatural standard of living for the corporation.

On November 30th, four days after the “push” of energy out to the universe where I saw and really felt my life moving toward a new life in Hawai’i, I happened to open up a local Maui internet newspaper.  I stumbled on an article about  an organic farmer who was going to start looking for help. He mentioned a program that connects farm hosts with farm-workers, interns and would-be farmers who wish to trade their labor for food and lodging. I checked some sites on the web and couldn’t believe it. It seems like EXACTLY what I was looking for. I could exchange my labor around an organic farm (in Hawai’i!!) for food and lodging (in Hawai’i!!).

The next day, I drafted an introductory/inquiry email to some of the host farms.  I indicated that my partner and I would be selling off/giving away just about everything we own to get to Hawai’i within the next month or two.  We would love to trade our services for food and lodging while working with our hands to make our lives, and the lives of others healthier. I sent my seventh email, and a feeling rushed over me telling me THAT would be a great farm to get on-board with.

I was also reading information from previous farm-workers who said not to become discouraged if you didn’t hear back right away. Keep trying because Hawaiian farms are inundated with requests from all over the world.

At that very moment, I became upset over a mundane incident going on around me, so I decided to light incense throughout the house to calm me down. It wouldn’t do me any good to send emails saying how peaceful and drama-free I am while being upset about something out of my control.

After I lit the incense, I decided to pick-up the nearest book (believe it or not, the Holy Bible was on top of the stack), and I did a little bibliomancy by flipping the pages.

8 Then said he unto me, These waters issue out toward the east country, and go down into the desert, and go into the sea: which being brought forth into the sea, the waters shall be healed.
9 And it shall come to pass, that every thing that liveth, which moveth, whithersoever the rivers shall come, shall live: and there shall be a very great multitude of fish, because these waters shall come thither: for they shall be healed; and every thing shall live whither the river cometh.
10 And it shall come to pass, that the fishers shall stand upon it from En-gedi even unto En-eglaim; they shall be a place to spread forth nets; their fish shall be according to their kinds, as the fish of the great sea, exceeding many.
11 But the miry places thereof and the marishes thereof shall not be healed; they shall be given to salt.
12 And by the river upon the bank thereof, on this side and on that side, shall grow all trees for meat, whose leaf shall not fade, neither shall the fruit thereof be consumed: it shall bring forth new fruit according to his months, because their waters they issued out of the sanctuary: and the fruit thereof shall be for meat, and the leaf thereof for medicine.

I couldn’t help but smile. The verses were so incredibly relevant to the place where I want to live out the rest of my days.  When I got back to my computer, I had an email:

You email resonated strongly with me. I would be honored to have you here. I am forwarding your email to my son who will probably contact you as well.

I couldn’t believe it! We are going to be living in Hawai’i in January. We will start out at a farm on the Big Island and possibly make our way over to Maui in March. We could utilize the zero overhead (food/lodging) when we get there to find permanent employment and living space. Or who knows? Maybe we’ll end up enjoying the farm-hand life.

I turned in my 30-day notice to my landlord (I’ve been month-to-month for the past 3 years), and I’m preparing for the big move (eBay, Craigslist, Yard Sales and Goodwill are all on my agenda for this month).  My new life will begin in mid-January, so I only have 6 weeks to prepare. To say I’m excited is an understatement. I am eternally grateful for the universe providing an answer to my requests (and thankful that I could recognize the opportunity when it showed up in front of me).

Note: Surfers never tell where the best surf spots are because they would get overrun by non-locals who end up getting in the way of the good breaks. I won’t tell the name of the group I became affiliated with because, if you really want to be in Hawai’i, if your heart and soul are pulling you there, then  you’ll figure out how to get there just like I did. 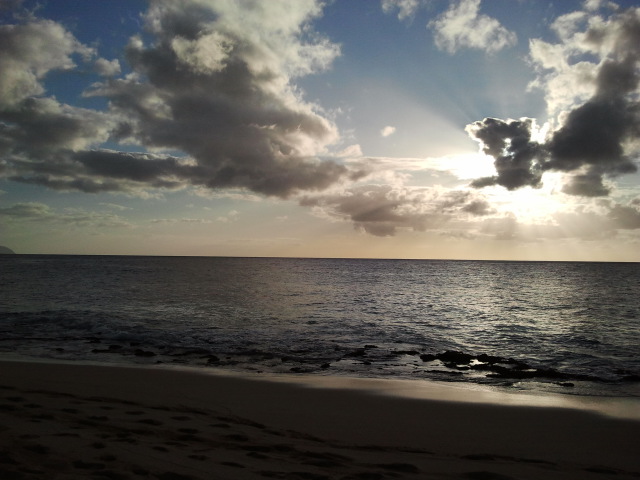